The future of the September issue was already uncertain. Then 2020 happened

In February, just weeks after starting as editor in chief of Marie Claire, Aya Kanai jet-setted to Europe for fashion week in Milan and in Paris. It was there that she started planning the magazine’s September issue, considering what trends to highlight in what is heralded as fashion magazines’ marquee product.

Kanai did not know then that so much would change over the next six months.
The September issue and all of the other print and online stories leading up to it would be produced, for the most part, from home because of the pandemic — a change that Kanai, for one, welcomed because it prompted her team to stop using physical storyboards.
“Seeing that wall is a very glamorous moment, but it’s an experience of the brand that a consumer never has. When have you ever taken every page of a magazine and put it on your wall?” Kanai told CNN Business. “In some ways, [the pandemic is] the ripping off of a Band-Aid that really needed to happen.”
That neatly sums up how magazine industry has been forced to adapt to new challenges in what was already an increasingly difficult business: Selling print magazines.
The September issues are huge investments for fashion magazines that typically lead to big financial returns. They signal the end of summer and a change to cold weather wardrobe. Publishers seize on these changes by loading their pages up with advertisements and shopping advice. A 2009 documentary, “The September Issue,” chronicled the production of Vogue’s 2007 September issue. That issue had 840 pages, 727 of them ads.
But the September issues have long been shrinking in size as both advertisers and readers increasingly turn to digital. The decline in ad dollars only accelerated this year as brands pulled back their spending amid the pandemic’s economic fallout. Smaller budgets have forced magazine editors to question what to include in the pages that would properly capture the zeitgeist. The answer came when George Floyd’s death in the hands of police roiled the country with a reckoning over race, forcing the fashion magazine world to confront the tensions over who gets to appear on their glossy covers and contribute to the content. 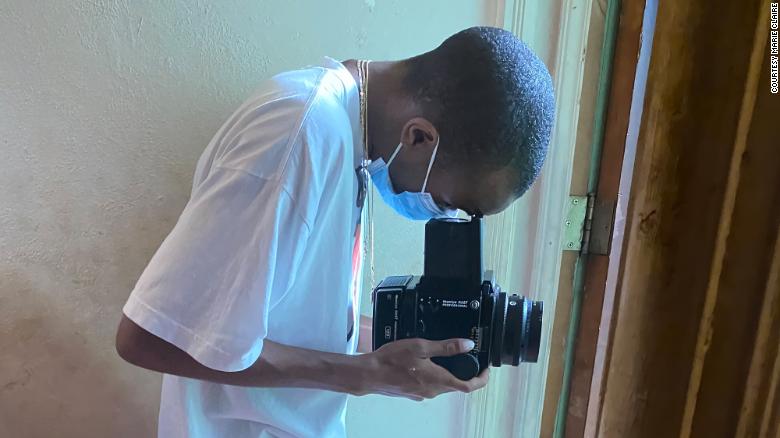 Behind-the-scenes of one of Marie Claire’s photo shoots for the 2020 September issue with photographer Quil Lemons.
To be clear, claims of racism and lack of diversity has long dogged the magazine and fashion world. But for this year’s September issues, editors are showing readers that they are not going to slow-walk their efforts to promote diversity. They are going all in — like ripping off a Band-Aid.

“A badge of honor”

The significance of the September issue has managed to outlast the pressures in the magazine industry. That permanence can be credited to the fashion industry because fall is when “brands launch new products” and “when women are refreshing their wardrobes and thinking about their approach to the season,” Kanai said.
Beyond the fashion spreads, magazine editors view September as a place to put their most important articles. It’s about “having stories in there that meet this moment,” Esquire Editor-In-Chief Michael Sebastian told CNN Business.
But amid the rise of digital and the fall of print, editors have come to understand that each magazine issue they choose to print must provide value.
“The September issue is always a badge of honor for everybody, where you throw all your best and finest, but as the culture has changed, it’s important to reflect that in every issue,” said Laura Brown, editor in chief of InStyle.
This year, some brands have cut and combined print issues. Marie Claire published just one for the summer. Esquire dropped its frequency from eight to six per year.
InStyle has maintained a monthly publication schedule. Doug Olson, president of InStyle owner Meredith Magazines, told CNN Business that his team continually evaluates if it should stick with print.
“In the case of InStyle, the answer has been yes,” Olson said. “It still makes sense because our consumer metrics are strong enough even with the reduced advertising. We don’t want to do anything to jeopardize our relationship with the consumer, unless we absolutely have to.”
The magazine’s September issue is expected to bring in less revenue than usual. InStyle Publisher Agnes Chapski told CNN Business that luxury, fashion and retail ad spending — which drove “a lot of the business” for previous September issues — has “slowed considerably.”
But that doesn’t necessarily spell doom for the future of print magazines or the September issues. Aileen Gallagher, associate professor of magazine, news and digital journalism at Syracuse University, told CNN Business that while social platforms like Instagram have become real-time tastemakers, magazines add value in their curation and overall presentation.
“Nothing comes close to replicating that sense of discovery and delight that comes from reading a print magazine,” Gallager said. “I don’t think they are going to go back to being as popular as they once were, but I think there’s still a place for print because it delivers like nothing else does.”

For this year’s September issues, magazine editors have had to be cognizant of fashion trends as well as the multiple crises — from the pandemic to the unrest over racism.
Editors have long been criticized for featuring White celebrities over people of color on the cover. Vanity Fair Editor-In-Chief Radhika Jones said in July that 17 Black people were on the magazine’s cover between 1983 and 2017, and she’s committed to changing that. Since joining in 2018, Jones has featured 10 Black cover stars.
Its September cover has yet to be revealed, but Vanity Fair announced that acclaimed Black author Ta-Nehisi Coates will guest edit the issue, which will focus on art, activism and power in 21st century America.
And for the first time in its 128-year history, Vogue chose the same theme for all its 26 magazine editions: hope.
The cover of British Vogue’s September issue, titled “Activism Now,” features 20 activists including anti-racism activists. Speaking with CNN’s Christiane Amanpour, Editor-In-Chief Edward Enninful said Misan Harriman was “the first Black photographer to photograph the cover of a September British Vogue issue… For me, it was very important that we had a Black team behind this.”
Stylist Law Roach posted a photo of InStyle’s September cover model, Black actress Zendaya, on Instagram with a caption thanking his team of stylists and designers, all of whom are also Black. 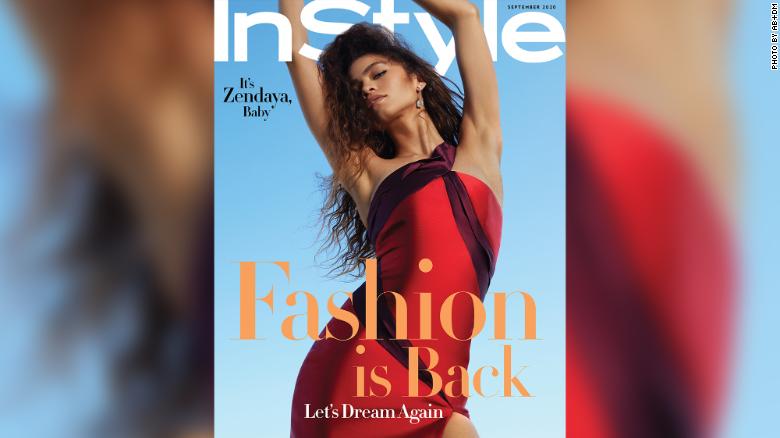 For the cover story, Zendaya spoke with Black Lives Matter co-founder Patrisse Cullors about activism.
Brown told CNN Business that the choice was reflective of the times but not done as “tokenizing.”
“I booked [Zendaya] because I like her. I admire her. She’s relevant during this time, but we’re not stunt casting,” Brown said.
Essence’s cover star is author and actress La La Anthony.
Deputy Editor Allison McGevna told CNN Business the magazine’s September/October issue “focuses not only on fashion, but also goes even deeper on issues that matter to our community.”
“Our cover story featuring our gorgeous cover star will showcase not only her beauty and talent, but also how she is shifting the conversation around Black women and our identity and connection across the diaspora,” McGevna said. “We also have amazing packages that highlight some of the challenges Black women are facing right now, from mental and physical health to social and political issues, as well as highlighting amazing Black creators.” 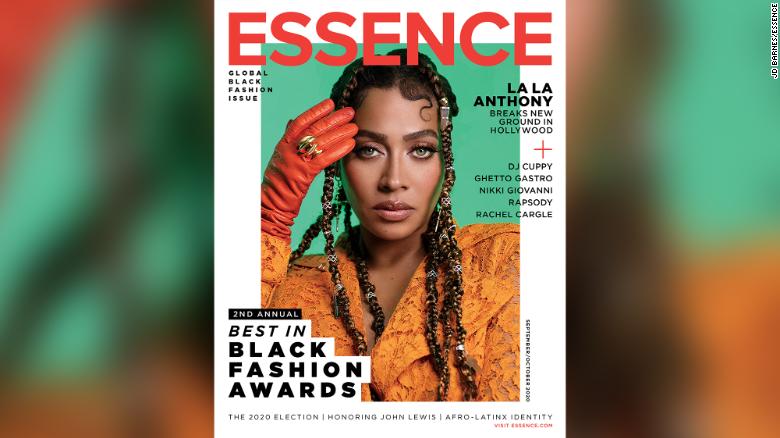 Due to stay-at-home orders and protests across the country, Esquire ended up fast-tracking a feature it had previously delayed. Politics editor Jack Holmes pitched a story about the friendship of seven Black mayors in mid-sized American cities. While Holmes originally intended to interview them in person over a seafood dinner in Shreveport, Louisiana, in mid-March, the group canceled their trip as the pandemic took hold in the US.
“Obviously we have a complete lack of leadership in the White House and governors have stepped into that, but even they’re playing politics to an extent. Mayors are the ones who have to figure out their city’s response to COVID, their city’s response to how they’re reacting to protests on the streets,” Sebastian said. “So we did it over Zoom.”

“Haze of coffee and conference calls”

Producing magazines has always been a heavy lift; The pandemic forced changes with nearly every step of the progress.
Many magazines abandoned in-person photo shoots and chose other methods. Vanity Fair used a drone to photograph its June cover star, actress Catherine O’Hara. InStyle opted for self-shot images: Alicia Keys’ husband and sons photographed her for the July cover; Drew Barrymore used a tripod to photograph herself for the August cover.
For its September issue, InStyle brought back on-set shoots. But there were difficulties. In May, a photographer had to cancel a shoot a few hours before it was scheduled to start after she found out she tested positive for COVID-19. Separately, a crew member found out she had been exposed to the coronavirus while driving to a different photo shoot.
InStyle had another incident in which a shoot was stalled because protest blockades delayed the delivery of a T-shirt from InStyle’s own Badass collection to designer Karla Welch.
“It was like death by a thousand cuts,” Brown said in reference to the T-shirt incident. “I told my team when the August issue came out that this is a slog, but at least we have something to show for it. At least we can slog and have a magazine that comes out every month.”
Marie Claire also elected to do in-person shoots for the September issue, with small crews wearing face shields and face masks. A table on set was covered with multiple bottles of hand sanitizer, Clorox spray, paper towels, disposable gloves and masks.
Esquire held its limited in-person photo shoots in Los Angeles with only local people on the ground. But Editor-In-Chief Sebastian, who is based in New York, was brought in via Zoom.
There have been some perks to producing magazines from home — or really from anywhere except the office. McGevna at Essence has been able to spend more time with her toddler and husband as she works from her kitchen table.
“It’s a haze of coffee and conference calls and tag teaming and five-minute fresh air breaks. It’s not easy, but I’ve come to love it,” McGevna told CNN Business. “While I miss seeing my coworkers, I don’t miss the subway and the commute, and I’ve been home to witness my son’s milestones. So there is always light in the darkness.”