Print continues to thrive: Highlights from FIPP’s The Future of Media whitepaper

FIPP, in collaboration with UPM Communication Papers, recently released a whitepaper, The Future of Media. It looks into the value print adds, and how it fits into the wider publishing ecosystem.

The whitepaper states that “despite the emergence of digital channels, print continues to thrive.” It explores strategies of publishers around the world who continue to put print at the heart of their offerings.

For many publishers, the question is not ‘print or digital?’ It is ‘What role does print play in the print, digital and experiential – a mix that allows us to maximize audience engagement, cross-selling and revenue generation?’ Here are the key highlights from the whitepaper:

According to the whitepaper, rumors of the death of print media have been vastly exaggerated. It mentions that 58% of subscribers still describe themselves as primarily print-oriented, and 60-80% of publisher revenues are still generated from print.

MPA’s Magazine Media Factbook 2018-2019 states that in the United States, “The top 25 print magazines reach more adults and teens than the top 25 prime time shows. And, despite generational differences, magazine consumption is strong.” 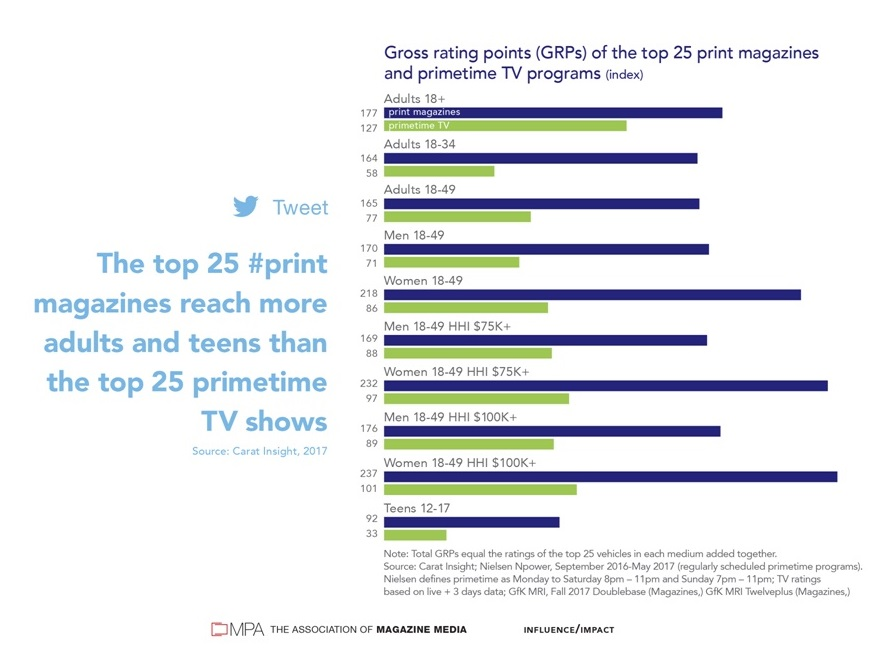 The New York Times reports that its own base of print subscribers is holding fairly steady. There’s only been slight declines year over year, despite its digital subscriber base growing by 265,000 in the 4th quarter of 2018 alone, according to FIPP’s 2019 Global Digital Subscription Snapshot. The Times remains committed to serving its print subscribers.

The whitepaper suggests that print’s resilience is being driven by its ability to fit in with and alongside a universe that combines all platforms. Successful magazines have reinvented themselves as brands that serve their audience via a range of channels, of which print is just one. This started with the same content being made available in print, online and later on, mobile.

Troy Young, President of Hearst Magazines, says, “Print is heavily edited and curated and it’s like an event that happens once a month.” He adds, “Print plays a really important role in saying this is important and this has a place in culture, and take a moment to think and read about this and consume it. And I think our magazines are going to play an important role in how we do that for a long, long time.”

The BBC History magazine has a print circulation of 100,000 and has been in business since 2000. According to its staff writer Ellie Cawthorne, “The ideal scenario is not print or digital, but a print and digital mix, all of which are adding to the experience for the consumer.”

She adds, “We start with an idea and what comes out of it is a relevant feature for print, an online video or podcast, and debate through social channels. That’s offering a full experience for all – and it demonstrates the value of a true print and digital mix.” 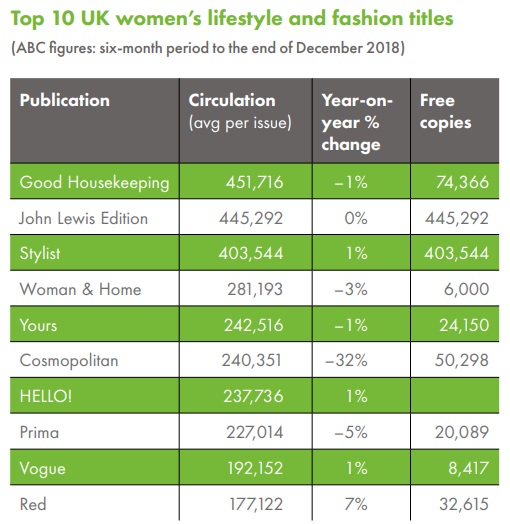 Bauer, the publisher of newsstand titles such as TV Choice, Take a break, Bella and That’s life, is renowned for its print-title heritage. Rob Munro-Hall, Group Managing Director at Bauer Media says, “We’re quite unusual in that a large part of our business is still powered by big, weekly publications – often still with a low cover price, high volume and a reliance on the newsstand.

“That’s still a big chunk of our business. If you take TV Choice, for example, we are still selling millions of copies a week, through the newsstand, in a very traditional way.”

However, Bauer has been at the forefront of expanding its magazine brands into new areas. Munro-Hall adds, “With many of our bigger products, like Take a Break, there are other revenue streams outside of the print magazine that are really complementary.

“I call that our 360 model, where we have a print brand in the middle of it with lots of satellite and brand extension products that sit all around it and do lots of different things.”

He shares the example of the Bauer title Motorcycle News, which sells 60,000 copies a week as a newspaper. It also has a website that gets 2 million unique users per month.

The newspaper is complemented by a magazine, MCN sport, an online store and an insurance product, which according to Munro-Hall is, “a significant business in its own right.” The publisher also organizes four motorcycle shows under the Motorcycle News brand.

The opportunity of reverse publishing

According to the whitepaper, the appeal of magazines – combined with the demand for digital and social, and expansion of print brands into events and partnerships – has seen a new reliance upon reverse publishing.

In this, “publishers flip their traditional approach of taking magazine content and later making it available online, to one whereby digital content is published online first and later repurposed in print form.”

While reverse publishing has been around for some time, the complexity of multi-channel strategies and the need to ‘compete for eyes’ is lifting its prevalence. In fact, some digital-first brands including Facebook, Allrecipes andNet-a-Porter, have launched new print offerings for specific audiences.

Facebook’s Grow was made available in business class lounges at Heathrow and a few more exclusive spots in and around London in June 2018. Figures have not been shared and the company states that “a printed version is sent to a handful of Facebook clients.” While this may not matter in actual business terms, the launch was significant coming from the social media giant.

Net-a-Porter launched its print title, Porter in 2014 after the publisher was informed through polling that there was an appetite for the “tactility, the look and feel of print.” The whitepaper states that within two years, the bimonthly magazine was available in 220 cities across 60 countries. Currently, it has a circulation of 180,000.

Allrecipes by Meredith is one of the biggest global reverse-model successes. It was a digital brand acquired from the Reader’s Digest. Currently, the bimonthly title has 7.7m readers.

Incidentally, other well known digital brands like Netflix and Buzzfeed are also experimenting with print products.

The continuing appeal of print products

Hearst circulates over 5 million magazines a month and reaches more than 20 million people per month through its websites. According to James Wildman, President & CEO, Hearst Magazines UK,  “In the latest round of ABCs, we had nine brands record period-on-period growth and four brands record year-on-year growth.

“The fact that several of our magazines are increasing their readership in print highlights the extraordinary quality and continuing appeal of our print products.”

Click here to download the whitepaper:
The Future of Media: How digital-to-print revenue models continue to shape the industry