The majority of subscribers will be light readers — and, INMA argues, publishers should be segmenting and studying this audience.
By SARAH SCIRE @SarahScire Oct. 5, 2021, 3:58 p.m.

With a pandemic, U.S. presidential election, and other high-interest news events in the last year, publishers enjoyed a surge of interest from readers who aren’t necessarily news hounds in 2020. Retaining light readers — “casual, infrequent, and picky consumers of news” — are key to a viable subscription business, according to a new report from the International News Media Association.

One problem that arises when trying to engage and retain this kind of reader, though? Many news organizations are staffed by people who are heavy news consumers themselves. (I imagine that applies to you, too, dear Nieman Lab reader.)

As the report’s author, INMA researcher-in-residence (and 2016 Nieman Fellow) Greg Piechota, writes: “Attracting, converting, and retaining the light reader involves both understanding news consumers who are unlike ourselves and tailoring our product to their needs.” 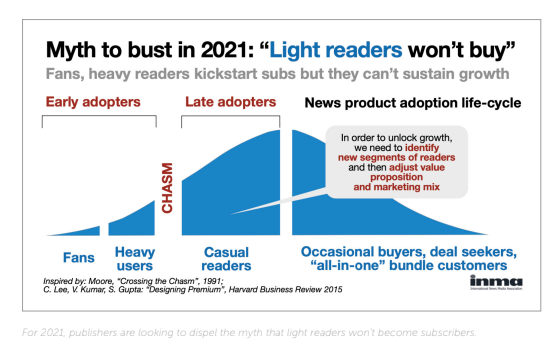 The good news is that many publishers were able to translate the news demand into an uptick in new subscriptions last year, even as news interest waned. INMA reports that publishers finished 2020 with 58% more online subscribers, on average, than they had at the end of 2019. (This data was generated for INMA by paywall and analytics company Piano, across 128 of its publisher clients.) To sustain the growth, news organizations will have to figure out how to keep light readers happy.

Put another way: “You had better start loving these light readers.”

INMA notes that while most publishers spend more on acquisition of new readers, market leaders put more resources toward engaging existing subscribers. Publishers like The New York Times — which saw about 45% of new subscriptions this year go toward non-news products like Games and Cooking — and The Boston Globe — which offers a long, dirt-cheap trial — are focused on retention.

“Retention is key to growth,” the report argued. “Spending money on acquisition without fixing the retention is like sailing a boat with holes in the bottom: You won’t go far regardless of how fast you row.”

INMA had a number of recommendations for news publishers:

Stories and topics that attract your light readers will succeed with your heavy readers, too. But it doesn’t work the other way around.

“Almost by definition, light-reading subscribers are more selective in what they read on the website than heavy users,” the INMA report notes. “It seems clear that it’s better to concentrate on boosting the engagement of lighter readers rather than maximizing the engagement of those who are already heavily invested in your product.”

Heavy readers and fans bring the highest lifetime value and help fund future growth, the report notes. But the majority of subscribers will be light readers. Every publisher, INMA argues, should be segmenting and studying this audience.

Piechota said he was most surprised by the proportion of news consumers who pay for a subscription but don’t actually read any articles or engage with the content they’re paying for. One recent case study in the United States showed 42% of paying subscribers hadn’t visited the site once in a month. Numbers from other countries appear to indicate similarly large percentages of “zombie” subscribers; across more than 300 news publishers globally, 39% of paying subscribers didn’t visit the site once over a 30-day period, according to Piano.

Keeping new subscribers could look like developing better onboarding practices — so that readers know what they get with a subscription — or experimenting with longer trial periods that provide readers who visit only rarely with more time to form a new habit. Besides the Globe, for example, the United Kingdom’s “slow news” publisher Tortoise said offering a year-long trial subscription helped with its ability to attract a subscriber base where 30% are 30 years old or younger.

Instead of focusing on broadening the first part of a sales funnel — say, brand new readers — INMA recommended something that looks a little more like this: 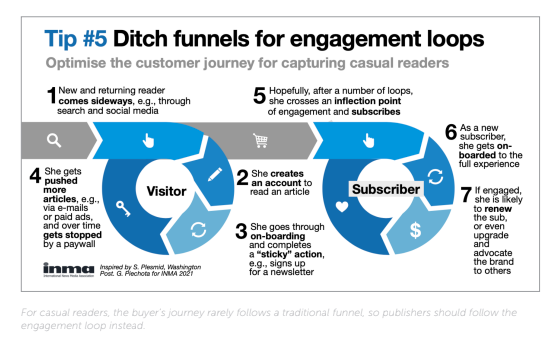 The full report is available for INMA members — or those willing to open their wallets — here.