Countless articles have been written about the harms caused by digital ad fraud. And countless more will be written. No one can claim to not know about it. No one can claim it’s not a problem. And no one can claim they don’t know what to do about it. Yet, ad fraud persists. There must be a reason. Perhaps there are many reasons — ad fraud fulfills key needs for practically every party in the digital advertising ecosystem. So instead of fighting ad fraud, these parties protect it, as vigorously as they would protect their own lives or livelihoods.

So how does a publisher, a seller of ads, continue to grow ad revenues that are dependent on the number of pageviews generated? Creating click-bait content, adding god-forsaken slideshows to pages, or reloading pages automatically only provide small increases. And humans are terribly unreliable for repeatedly visiting your sites, especially when you’re on a deadline and have revenue goals to meet. It’s a very easy step to decide to buy some traffic, especially if there are hundreds of vendors ready to sell that to you at low prices.

Some might even think, “oh, I’ll just do it this one time, I swear.” But just as drugs are addictive, sourcing traffic is even more addictive. Once you start, you will literally have physical withdrawal symptoms if you try to stop. You already showed your boss impressive revenue growth numbers last quarter (using sourced traffic), you want to show more growth, not drop back to levels before you started buying traffic. You can’t stop buying traffic; your job becomes more and more dependent on your continuing. Traffic created by bots is hands-down the most reliable way for you to repeatedly “hit your numbers” no matter how “stretch” they are. Your boss is proud of you, and you get more year-end bonuses. Rinse and repeat. 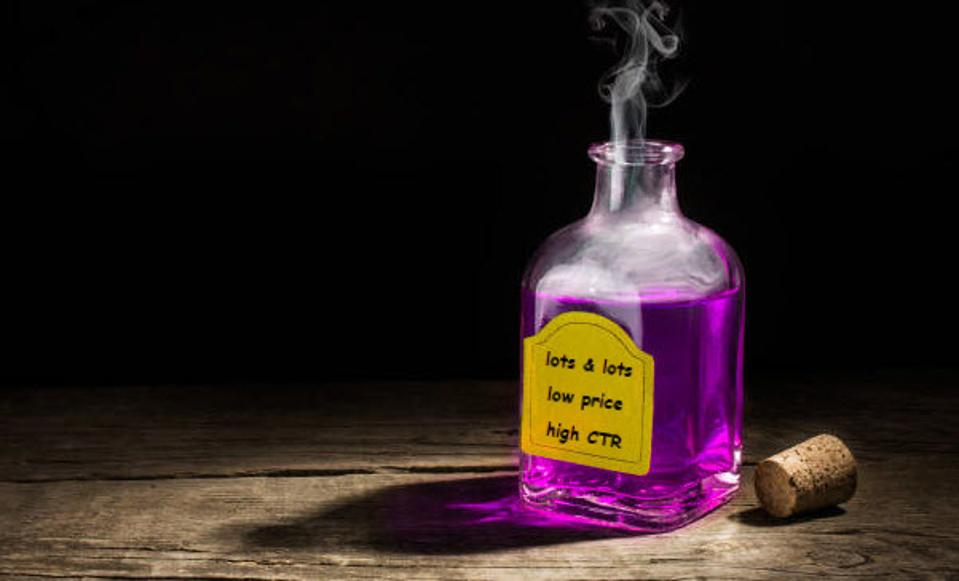 Humans are also notoriously lousy clickers of ads. They only click 1 in 1,000 (0.1% click-through-rate, CTRs) and some of those were accidental, fat-thumb clicks. Advertisers desperate to show better “performance” love to buy ads from sources that consistently show higher CTRs. These programmatic sources may also have lower prices and far larger quantities of ad impressions than large, mainstream publishers. The triumvirate of large quantities, low prices, and high CTRs creates a magical elixir that advertisers don’t just want to sip; they want to gulp it with voracious depravity. Ok, ok… most of them just want to drink a lot of it; and then drink more. They even instruct their media agencies to procure more of it for them.

Of course you knew that humans don’t manufacture that elixir; bots do. Botnets large enough to overwhelm Google, Twitter, and YouTube in DDoS attacks, can generate enormous amounts of ad impressions. Since these ads were created out of thin air, the prices can be very low but still profitable for the fraudsters. And bots can be programmed to click on ads, in order to exhibit desirable click through rates, high enough to attract more ad dollars. If advertisers buy from real, mainstream publishers, there are smaller quantities of impressions to buy, higher prices compared to the fake ad impressions, and lower CTRs (hint: because those are real clicks from real humans). So advertisers demand more delicious bot elixir, instead.

Everyone Else Needs More Ad Fraud

You can’t get more humans to visit more, use more, and click more. Humans would protest. But software programs – bots – won’t protest; they will do their job faithfully and generate reliable ad impressions and clicks and growth rates too. Hackers will happily make more bots for you, so you don’t have to.

Digital ad fraud fulfills everyone’s needs so well, it’s no wonder every party in the digital ad ecosystem protects it like their lives depended on it. Their livelihoods certainly do.

CMOs and marketers who care about actual business outcomes from their digital campaigns need to look into ad fraud for themselves, because all of the above parties are incentivized not to.